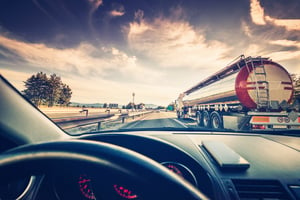 The drivers of these big rigs are required to go through rigorous training, along with strict licensing and background-check procedures. However, collision rates between smaller vehicles and large semi-trucks are high in America.

One reason for the number of accidents is due to the large number of semi's on the road. At any given time, there are around 2 million semi's in operation throughout the fifty states. In the most congested corridors of our nation's highways, every fourth vehicle is a truck, and driving with them is a two-way street (literally and metaphorically). To trust in the responsibility of the semi's driver is important, as is knowing what you can do to stay safe around them.

According to Automotive-Fleet.com, "Truckers have to contend with large blind spots to the right and rear as well as smaller ones on the right front corner and mid left side of the truck." A rule of thumb is to look for the semi driver's face in their side mirror -- if you can't see them, they can't see you!

Know the rules of passing.

Experts say to never pass on the right, as that is the side of the truck with the largest blind spot. Instead, complete your pass quickly and on the left of the rig. Another rule is to make sure that you are ten car lengths in front of the truck before changing lanes. Finally, one needs to take note of the fact that a semi's back wheels take a shorter path than the front wheels when the truck makes a right. This means that you should never attempt to quickly speed through while the semi begins it's right turn.

The first part should be obvious--driving behind a truck trailer lowers visibility for you.

Never cut off a truck.

As mentioned above, semi's take far longer to come to a halt than your vehicle. Cutting off a semi could result in the trucker having to brake hard and end up jack-knifing his rig (this happens when the trailer wheels continue to spin faster than the tractor wheels, causing it to slide).

Dim your headlights when passing a rig. The beams reflect off of the rig's side mirror, causing two or more seconds of temporary blindness when traveling at 55 MPH. A rule of thumb for this is to lower your lights about a block or so behind a semi.

This needs no explanation--truck drivers have a hard time. If they need extra space to back up or time to merge, let them have it. They keep our economy moving!

The more you drive alongside large trucks, the more comfortable it will become. However, it is vital to remain alert and aware of traffic on all sides, as always. Follow the rules of thumb listed above, and you will have a much easier time on the road! Just remember to buckle up & stay safe!